The Rise of the Planters

Alan McWilliam, Forge Europe Director, is encouraged by the trend towards pioneering that he sees emerging across Scotland.

As I read this title over it makes me think of some weird mix of poor sci-fi TV programmes from the 1980s (who can forget the slightly plastic but terrifying Day of the Triffids) and tweed-covered Radio 4 gardeners emerging to establish some sort of new horticultural future.

Not surprisingly for a Forge blog the title refers to neither Triffids nor gardeners, but rather what I see as a new and exciting phenomenon in the Scottish church scene – the increasing move towards church planting and new missional projects by many within the church. 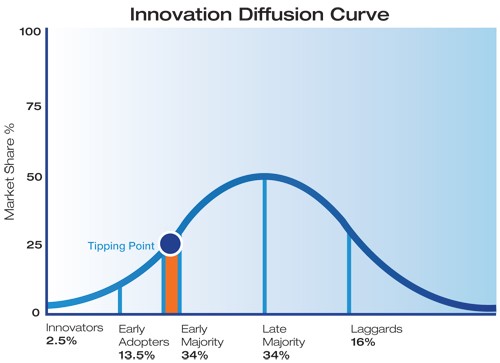 For those of us who are slightly longer in the tooth around the Scottish missional discussions we have already seen the front edge of the adoption of innovation curve – we have seen the innovators, the mavericks, the first pioneers. This is a group of people who have the horizon very firmly fixed in their sights and march towards it boldly.

In the last few years I think that we have increasingly seen the early adopters appearing. Those who very quickly have seen the benefit and need of the new missional activity and who have jumped on board with passion and enthusiasm.

But I thinking I am seeing something new happening. The early majority are beginning to get involved. Denominational executives are taking meetings about pioneer training and support; established church leaders are coming to and actively contributing to church planting city mapping exercises; funders are making approaches about how to strategically invest in this area of church life. Let’s be clear – this was not happening 5 years ago.

Now I am not getting carried away. It still very tentative and there is a long way to go, but these are encouraging signs.

And so, it has made me think – what will the church scene be like in 5 years? What happens if we get to tipping point? What happens when we no longer have to argue the merits of church planting and missional activities, but rather can take this for granted, and instead are able to build strong collaborative networks that initiate and support new activity?

There is something happening. I believe it is the Rise of the Planters!

Forge is committed to training and supporting of pioneers. If you are interested in joining our year long, part time training programme or the Forge Support Network for pioneers, then get in touch with us.

Alan is an ordained minister in the Church of Scotland and is the primary leader at Whiteinch Church of Scotland, Glasgow. In 2017 Alan has also started to pioneer the first Church of Scotland “replant” in Ruchazie, Glasgow. He is the European Director of Forge – a training and resourcing organisation for new missional expressions of church. Alan has a strong desire to see new patterns of church life which will be effective in communicating the gospel to the people of Scotland. He is married to Diane, has two sons, and is a fervent Rangers FC supporter.